An in-house flyback chronograph for less than $4,000 is nothing to scoff at. One of these is now available from Frederique Constant Men’s Replica, which introduced a typically classical interpretation just last week. We shared the basics as soon as the replica watch was launched, and now a few days later we’re back with live images – including one of the new movement – and some more information. But our overall opinion hasn’t changed – this really is a great replica watch for the money.

First up, let’s take a look at the back of the replica watch, which offers a view of new FC-760 caliber. This is a movement which took six years to get right, so it deserves a little attention from us (and from you). It’s a Frederique Constant Flyback Chronograph Replica, meaning you can reset the chronograph hand without stopping it first, useful for timing laps, for example, or any two events that follow each other instantly. Developing a chronograph is never easy, and it’s something to be applauded for sure, but it’s worth noting despite the dial’s looks (more on that later) this is a two-register chronograph that only times up to 30 minutes.

It’s an automatic chronograph, originally developed by Frederique Constant’s prodigious technical director, Pim Koeslag, and entrusted to Alpina (a sister brand) before making its full debut in an actual FC collection, still with the same modular construction and surprisingly short components list. But this time it is cosmetically enhanced, which is a good thing since it is fully exposed, gold rotor and all, through a sapphire caseback. 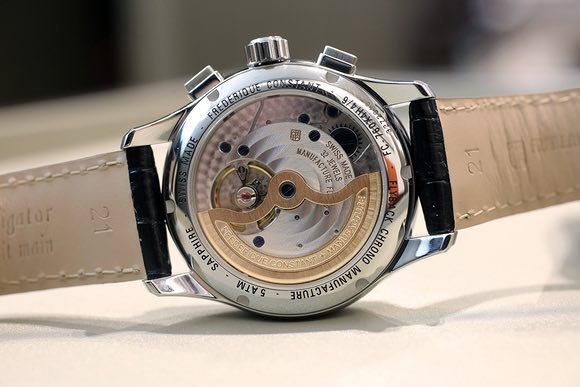 The case measures 42mm and features rectangular chronograph pushers, giving it just a touch of vintage charm. The replica watch will be offered in stainless steel with or without rose gold plating. Several dial options are also available when it comes to color, finish, and dial features. The most classic of the bunch is a silver hobnail dial with thin traditional Roman numerals, blued pomme hands, and a hobnail minute track on the outside.

The new model comes in several styles and case materials, including this stainless steel model with a hobnail dial.

Just as elegant, but perhaps a little more contemporary in terms of style, are the dark grey and silvered dials with baton indexes and a tachymeter scale on the outside (note: the replica watches shown here are still prototypes and the tachymeter scale is wrongly labeled a pulsometer on the dial here – look at the graduations though and you’ll see it’s a tachy scale). The combination comes off surprisingly well, and these seem to the most popular of the three. My personal pick is the dark grey version, which offers the most interesting contrast with the rose gold case and feels like the most versatile. But each one stands on its own merits.