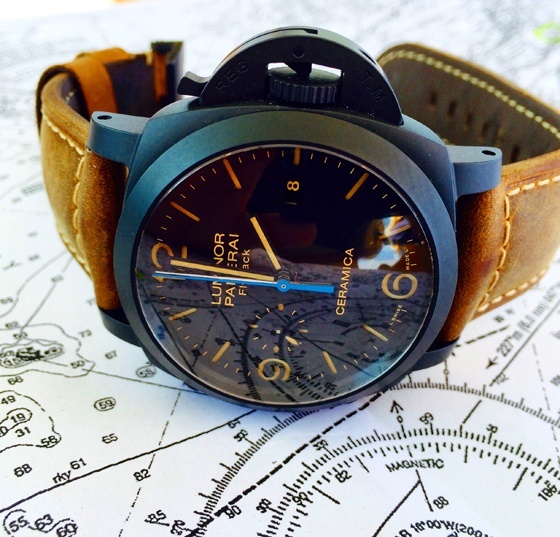 As legions of Paneristi are aware, Panerai Mens Replica Watch has had a long association with the sea; the brand was, after all, established as a supplier of professional diving replica watches to the Italian Navy. More than a decade ago, the Florence-born, Swiss-made Panerai brand built on this maritime legacy by sponsoring the Panerai Classic Yachts Challenge, an international series of regattas in which vintage boats in several classes compete for a prize Panerai timepiece. This year, I had the honor of joining Panerai for the first North American leg of the PCYC, at the Corinthian Classic Yacht Regatta in Marblehead, Massachusetts.

Launched at SIHH 2015, the swiss replica watch (reference number: PAM 00580) is distinguished by its 44-mm-diameter matte-black case, constructed of a synthetic ceramic based on zirconium oxide. This high-tech case material is up to five times harder than steel but substantially lighter in weight, as well as highly resistant to scratches, corrosion and extreme temperatures. Upon first strapping on the Ceramica — which comes on a sporty, natural brown leather strap with contrast stitching and a case-matching, black-coated titanium buckle — you’ll notice its undeniably big and masculine proportions. However, the use of ceramic for the case, and the supple softness of the strap, makes it extra light and comfy on the wrist — an important factor when you’re going to be wearing it for several days in the scorching August sunshine.

Like other Panerai Replica models with the classical Luminor 1950 case, this one is equipped with the Panerai-patented crown protector, whose tiny locking lever can be engaged and disengaged with a flip of the thumb or forefinger. Locking and unlocking the device — which one does in order to set the replica watch’s time and date and wind its mainspring — provides a bit of tactile fun while adding to the timepiece’s “tool watch” appeal. It’s almost a shame that, thanks to the Ceramica’s three-day power reserve, you don’t really need to perform this operation all that often (More on this later).

As its lengthy moniker makes clear, the replica watch’s showcase function is a flyback chronograph, and a somewhat unconventional one at that (No, it’s not a regatta countdown timer; that would be the PAM00526 model). To preserve the aesthetic purity of the Luminor 1950 case, the two chronograph pushers — which in most such replica watches would flank the winding crown on the right side of the case — were placed on the left side, where they would not be in the way of the crown protector. Another clever design choice is the use of two center-mounted hands — a blued hand to count the stop replica watch seconds and a rhodium-plated hand to tally the accumulated minutes. As these hands contrast nicely both with each other and with the matte-black dial, an easily legible reading of the chronograph is assured. (The one subdial, at 9 o’clock, is for the continuously running seconds.) Pressing the pusher at 10 o’clock starts and stops the chronograph, while pressing the one at 8 o’clock sends the Panerai-blue seconds-counter hand flying back to zero and also resets both central hands at the end of timing an interval.

One might think this unorthodox positioning of the chrono pushers would make them more unwieldy to operate (at least for a right-handed person wearing the replica watch on his left wrist) but the opposite is true. While the pushers are somewhat small, and require a rather firm touch to engage, this design means you can get some leverage and apply a little extra force by grasping the opposite corner of the case with the thumb and and using the forefinger to press the buttons.

The replica watch was put through its paces during the two days of the Corinthian Yacht Club Regatta, during which I joined a small group of Panerai guests on a well-appointed and professionally captained spectator boat to follow the great, vintage sailing vessels in their quest for trophies. Setting off from the Marblehead harbor, we traced the route taken by the yachts, out to Newcomb’s Ledge, around Baker’s Island, and back to the finish line near our “home base,” the chic Corinthian Yacht Club. Day one of the regatta was sunny and breezy, and while the captains and sailors aboard the competing yachts certainly put forth their best efforts, my crew on the motorized spectator boat — with fully stocked bar, boxed lunches, and even resting quarters below decks for anyone who felt seasick — had a relatively laid-back day. Day two, on the other hand, which started off with ominous cloud cover, whipping winds and choppy waters right from the starting gun, was more like a Herman Melville adventure.