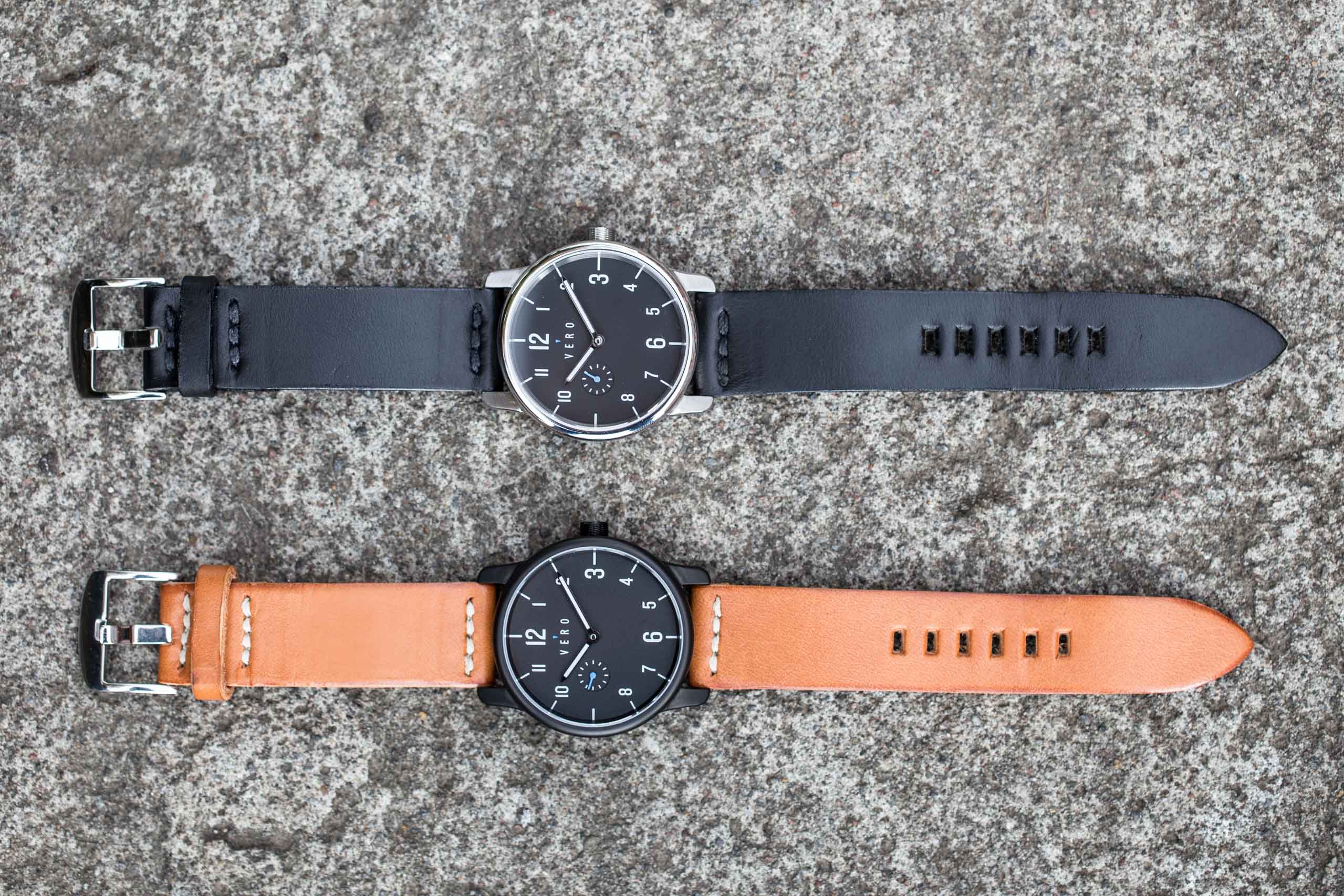 Truth and transparency are the guiding principles behind the aptly-named VERO Watches. Vero—Latin for “truth”—wants its customers to be well-informed, so they’re being upfront about where they source their parts, who their suppliers are, and how their watches are being built.

In 2014, Chris Boudreaux, a watch enthusiast and a professional triathlete, brought together a small group of guys to create VERO Watches. Now, the company is launching its first line of watches, and the initial 100 units are already spoken for and will go out to customers this month. They’ve already made plans to do a second run to fill the ever-growing demand.

“It’s exciting and scary, too,” said Boudreaux. “It’s one thing when it’s just the guys sitting around making stuff and geeking out. But it’s a whole other thing to now translate that into customers and purchases.”

In the brand’s infancy, Boudreaux brought on a business partner, a watchmaker and hands-on builder and got to work designing Vero’s first watch. Over drinks, 3D model building and initial renderings the team developed a watch, and not long thereafter formed relationships with several suppliers for key components.

The small staff—including one guy who dropped out of college to help VERO Watches Replica grow—is passionate about watches and dedicated to the company’s mission of truth and transparency. In fact, a card explaining where all the parts are made, who made them and how they’re assembled will be included with every purchase. “We want to be really open about where everything comes from,” Boudreaux said. In an industry plagued with deceptive marketing and added-value “Swissness,” VERO’s transparency has merit. The cases and dials are made in Oregon, the sapphire crystals are sourced from a company in New Hampshire, the hands are from France and the movement—Eterna’s Caliber 39—is Swiss. Assembly and finishing, which includes testing and hand polishing, are all done in-house in VERO’s Portland shop.

Boudreaux said it was important to them to make the dials in-house. They wanted to be able to experiment with colors, sizes and textures. “We have hundreds of trashed dials laying around,” Boudreaux joked. “It’s definitely a lot slower getting a product out, but now we can make dials. We can change colors, change faces and do whatever we want because we put that time in.”

“We want to be really open about where everything comes from.”

VERO’s first run of 100 watches will feature two different cases and dials: a stainless steel case for $2,900 or a Diamond-Like Carbon case for $3,400, both available with either a black dial or one in naked stainless steel. The watch measures 41mm across the bezel, 47mm from lug to lug and 14mm in height. It features 22mm lugs—drilled to facilitate swapping straps, of which there are three to choose from: leather, silicone, and waxed cotton (every VERO watch will be shipped with a spring bar tool). The case is rated to 5ATM, so it’s not for the watermen of the world.

Undeniably, the watch is simple in appearance, yet it’s well thought out. With regard to the case, I like the way the bezel sits within the mid-case, breaking up what would have otherwise been a monotonous profile. Moving on to the dial, it’s stark and understated. It’s not designed to turn heads, but it is immediately legible. The markers and numbers are in white on the black dial and in black on the naked dial. The 12, three and six markers are enlarged, making the dial easy to read. There’s a sub seconds at nine with a small blue second hand sweeping along the register. The small addition of the blue in the second hand and on the triangle in the VERO logo keeps the watch’s color pallet to a simple but sleek black, white and blue.

Boudreaux chose the Eterna Caliber 39 movement to provide the watch’s heartbeat. This incredibly versatile Swiss movement is made to give watchmakers options through modularity. From the same base movement, 88 different movement variations are available. The versatility of the Caliber 39 will allow VERO to build new watches and keep up with ever-evolving watch trends without having to drastically redesign a case. “The movement was a perfect fit,” says Boudreaux. “Everything else just felt like a compromise.”

Reliability was another big reason the Caliber 39 was chosen for VERO watches. Boudreaux said he wanted a movement that could stand the test of time. A watch that can be worn, banged around and still keep ticking for the next generation. “I’ve got two boys and I’m really into the idea of passing down watches,” he said. “You pass down your Rolex or whatever, because you know it’s going to work for them when they grow up too. That’s what we’re all about.”

Boudreaux explains that while they plan to do a second run of VERO’s first watch, they’re also working on some new releases. They’ve been experimenting with different dial colors and treatments, working on new case shapes, and they’re also designing a GMT.

At their current price point, VERO watches aren’t as accessible as one might hope, and they’ll definitely have their detractors who will argue that there are numerous alternatives at $3,000. But as I’ve already written, there’s merit to what the team behind VERO is trying to accomplish, and they’ve certainly taken the right step toward American watchmaking by attempting to produce so much locally so early in their endeavor. They’re focusing more on learning the craft and less on the murky waters of buzz-word marketing, something we see all too often from other brands. VERO is still young (both the company and the team behind it), it’s growing and it’s not set in its ways. It’s a brand with a lot of potential ahead of it, and I, for one, am excited to see that development.

For more information, visit VERO watches (still under construction). For a closer behind-the-scenes look of the team at work, check out VERO’s Instagram.